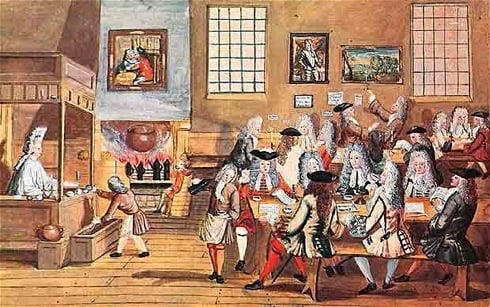 Tom Standage (@tomstandage), digital editor at The Economist and the author of the forthcoming book “Writing on the Wall: Social Media — The First 2,000 Years,” has a wonderful piece in the New Times Sunday Review entitled, “Social Networking in the 1600’s.”

I’ve always analogized social networking of today to town squares and coffee shops of years gone by. All represent places where people of all walks of life gather to exchange information and ideas. Trust is built (or destroyed) and relationships are nurtured.

Standage confirms this with his research of the 1600’s.

People went to coffeehouses not just to drink coffee, but to read and discuss the latest pamphlets and news-sheets and to catch up on rumor and gossip

Coffeehouses were also used as post offices. Patrons would visit their favorite coffeehouses several times a day to check for new mail, catch up on the news and talk to other coffee drinkers, both friends and strangers. Some coffeehouses specialized in discussion of particular topics, like science, politics, literature or shipping. As customers moved from one to the other, information circulated with them.

Like all good things that disrupt the status quo, coffeehouses of the 1600’s drew plenty of criticism.

As well as complaining that Christians had abandoned their traditional beer in favor of a foreign drink, critics worried that coffeehouses were keeping people from productive work. Among the first to sound the alarm, in 1677, was Anthony Wood, an Oxford academic. “Why doth solid and serious learning decline, and few or none follow it now in the University?” he asked. “Answer: Because of Coffea Houses, where they spend all their time.”

Meanwhile, Roger North, a lawyer, bemoaned, in Cambridge, the “vast Loss of Time grown out of a pure Novelty. For who can apply close to a Subject with his Head full of the Din of a Coffee-house?” These places were “the ruin of many serious and hopeful young gentlemen and tradesmen,” according to a pamphlet, “The Grand Concern of England Explained,” published in 1673. (emphasis added)

The warnings of lack of productivity and the demise of young people of course didn’t pan out.

Rather than enemies of industry, coffeehouses were in fact crucibles of creativity, because of the way in which they facilitated the mixing of both people and ideas. Members of the Royal Society, England’s pioneering scientific society, frequently retired to coffeehouses to extend their discussions. Scientists often conducted experiments and gave lectures in coffeehouses, and because admission cost just a penny (the price of a single cup), coffeehouses were sometimes referred to as “penny universities.” It was a coffeehouse argument among several fellow scientists that spurred Isaac Newton to write his “Principia Mathematica,” one of the foundational works of modern science.

Coffeehouses were platforms for innovation in the world of business, too. Merchants used coffeehouses as meeting rooms, which gave rise to new companies and new business models. A London coffeehouse called Jonathan’s, where merchants kept particular tables at which they would transact their business, turned into the London Stock Exchange. Edward Lloyd’s coffeehouse, a popular meeting place for ship captains, shipowners and traders, became the famous insurance market Lloyd’s.

And the economist Adam Smith wrote much of his masterpiece “The Wealth of Nations” in the British Coffee House, a popular meeting place for Scottish intellectuals, among whom he circulated early drafts of his book for discussion.

Communication, collaboration, the exchange of ideas, the building of networks founded on trust, and the acceleration of the flow of knowledge. How could this be bad?

But as with coffeehouses 400 years ago, we’re quick to criticize the medium enabling this communication, collaboration, and networking. Lawyers and law firms are especially prone to such small thinking. “I don’t get it, I’m not like those people, it’s just for the unproductive, it’s what all these kids wasting their time are doing.”

Sure we “waste time” in our social activity. That’s okay. What’s golf? What’s watching a sporting event on TV? What about idle chit chat that permeates any business meeting, or even depositions.

My con-law professor, Don Prinz, used to label shallow thinking people as having no sense of history. I couldn’t help think of that when reading Standage’s piece.