There’s blogging, and then there’s blogging well. And really, an argument can be made that anything but the latter really isn’t blogging at all. After all, what is blogging—is it simply the act of producing content to an online publication that displays it all on one page in reverse-chronological order? Or, is there something more to it?

If it’s the former, big law firms have blogging for a long time. At LexBlog, we’ve been working with members of the vaunted AmLaw 200, in addition to firms of all sizes, for more than a decade, as lawyers have for a long time used the power of the written word to build credibility—long before platforms like Blogger and WordPress and Typepad were but a glint in some kid’s eye. But still, as law firms began moving that written word to those platforms, the challenge was—and still remains—fitting it to the medium upon which they are writing, and the challenge is no more prevalent than among the nation’s top firms.

In reviewing all the posts that come across the LexBlog Network on a daily basis, which generates the majority (or close to it) of its content from a number of these biglaw firms, the problem is clear: they’re taking the legalese-ridden white-paper style alerts and copying them over to what they’re calling blogs, with many of them being reactionary analysis of litigation, regulation or legislation.

That, though, is changing. I’ve seen it changing day by day, month by month and year by year here on our own network, and the improvement in quality is evident in this year’s iteration of the top “best law blog” rankings around—those being the ABA Journal’s Blawg 100.

Now, it’s worth noting that biglaw has long been represented in these rankings. Lowering the Bar for example, a legal humor blog from Shook, Hardy & Bacon’s Kevin Underhill is in the Blawg 100 Hall of Fame. Jeff Richardson, an attorney at Adams & Reese, authors iPhone, J.D., which is now a staple in these rankings. Then there’s Dewey B Strategic from Jean O’Grady, Director of Research Services and Libraries at DLA Piper. And that isn’t to discount the biglaw blogs in these rankings from the professionals working at these firms in a non-legal way, which includes Heather Morses’s The Legal Watercooler and the über-popular 3 Geeks and a Law Blog, where one of the “3 geeks” is Norton Rose Fulbright Internet Marketing Manager Lisa Salazar Fulbright.

But if you open up those links, it isn’t evident the blogs have any tie to those firms, which is likely by design. And there isn’t anything wrong with that, it’s just that the blogs aren’t from the firm—they weren’t created by them and they have no stake in the content produced there.

Those, however, aren’t the only Blawg 100 publications from AmLaw 200 firms. There’s actually seven AmLaw 200 firm-branded blogs in the Blawg 100, and what’s most interesting is that five of them are new to the rankings this year. The other two joined just the year before last.

Yeah, biglaw is getting the hang of this.

As I tell lawyers and law firms all the time, particularly those at these large firms, the bar to clear to distinguish yourself as a legal blogger—and a legal blogger from a large firm—is not that high. But still, you have to have at least one of the key components to blogging well, if not a handful of them. 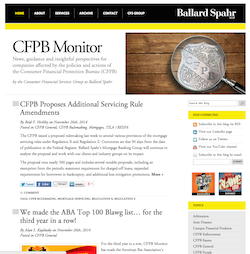 Take for example Ballard Spahr’s CFPB Monitor. What in past lives, or from other firms, would be a blog devoted to financial regulation as a whole, their offering takes aim at a niché—an age-old trick of bloggers. They exclusively cover the Consumer Financial Protection Bureau, and boy do they cover it. If there’s any news even loosely tied to the CFPB, they’re on it, and they explain it in a way that anyone could read. It may be devoted to those professionals who need to stay apprised of activity surrounding the bureau, but anyone who wants to read it can. It may not be super colorful, nor passionately opinionated—but it does what it does and does it well.

Now, if you’re looking for color among this bunch, there’s Foley Hoag’s Trademark & Copyright Law, which covers interesting branding and trademark-related issues. Though some have—and continue to try to—do this without actually, you know, displaying artwork around those marks, Foley Hoag certainly doesn’t, which is evident from just quickly scrolling the front page. Did you think you’d ever seen biglaw discussing porn star images in dating profiles? It isn’t the stuff of legal alerts, and it looks a lot like the trademark-related blogs you see from non-AmLaw 200 firms in these rankings, Winthrop & Weinstine’s DuetsBlog (long overdue on getting in here) and Stites & Harbison’s Trademarkology, which made the 2014 Blawg 100 despite launching just a year ago.

Those two biglaw blogs I’ve described, while strong and filling an audience’s need, don’t necessarily display the relationship-building quality you see from blogs authored by solo attorneys—though that’s just the nature of biglaw group blogs, it’s hard to do. Still, that isn’t to say it can’t be done from, say, a partner at an AmLaw 200 firm. Take a look at what Richard Cohen is doing on Fox Rothschild’s Employment Discrimination Report. In addition to keeping readers entertainingly apprised of trends and issues associated with workplace discrimination, he engages readers on a nearly everyday basis. Comments and questions from his audience—comprised of fellow attorneys, HR professionals and other execs—turn into posts themselves. It’s a tactic you traditionally see from small and solos, but that it isn’t to say it can’t work for everyone—because it is here.

I don’t want to go on too long, because I think you can see the point. And that isn’t to say anything of Venable’s All About Advertising Law, which proactively covers that industry in a way that keeps things entertaining; Seyfarth Shaw’s California Peculiarities Employment Law Blog blending niché-oriented writing with colorful accessible language on a number of workplace trends; the excellent work of Stinson Leonard Street’s Liz Kramer on Arbitration Nation; and then there’s job K&L Gates has done with understandable case analysis on Electronic Discovery Law.

That, naturally, isn’t the near the end of the list of large firms doing quality blogging—but what you see in the rankings is a trend that should continue. Next year, I’d imagine there will be some holdovers from this group, and further headway from the rest of the AmLaw 200. These firms have long known they can draw on their top-tier talent they have in their firm to build credibility through the written word—but now they’re starting starting to realize that if people can’t read it, or not enough people want to read it, they’re limiting their return. So now, they’re blogging.

We get asked all the time about what it takes to get into the ABA Blawg 100. I’m sure at least a couple of LexBlog’s account managers have been asked that question in the last couple days. Part of it’s simple, you have to work hard. That’s what all of the blog authors who made it do. But on the most basic level, and this shouldn’t be surprising, you actually have to blog—and there’s more to blogging than just putting words on a page.