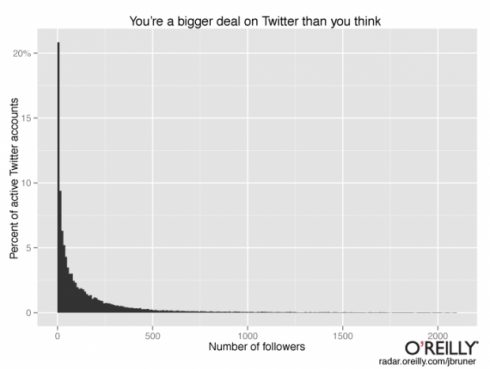 The median active Twitter user (tweets at least once a month) has only 61 followers. This from research performed by Jon Bruner (@jonbruner), a data journalist at O’Reilly Radar.

If you’re a lawyer seeing yourself as a Twitter laggard because you have only a few hundred followers, fear not. You’re in the 80th to 90th percentile. Reach 1,000 followers and you’re at the 97th percentile of active Twitter users. Check out how you stack up. From what I see, and it’s anecdotal, lawyers stack up pretty well. I see a lot of lawyers among those following me. Those of them new to Twitter will of course have a small number of followers. But I routinely see lawyers with 200 to 400 followers, putting them near the top 10 percentile of active Twitter users.

Bruner suspects that the people with 3,000 followers or more (the top one percent) were “prominent commentators, industry experts, or gregarious accumulators of friends to begin with,” irrespective of Twitter. He does not see Twitter influence created by Twitter alone.

I am not sure that’s the case with lawyers. I see a good number of lawyers with one to two thousand followers, and quite a few with more than 3,000 followers. By and large, these lawyers were not prominent in their own right. They built their influence by sharing valuable information on a niche area.

Admittedly, virtually all of the lawyers with a large number of followers blog. Nothing today enhances a lawyer’s reputation as a trusted authority like blogging. It’s this trust and authority in a niche that builds followers on Twitter.

The vast majority of Twitter users–76%–follow more people than follow them. I see that with lawyers. We talk more than we listen. Most lawyers also don’t work at sharing others’ content on Twitter, something that grows followers.

All in all though, lawyers are doing pretty well. If you have a couple hundred followers, you may wish to give your self a pat on the back rather than beat yourself up.